Adrian releases her first EP as Paradigm (out fo print)

Made the cut to take over the Angus Young position in Hell’s Belles.  Day job promotion! 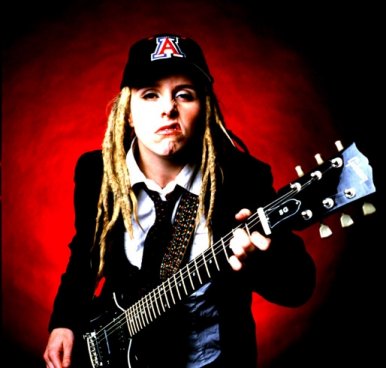 Adrian & the Sickness
A year and a half of living in Austin TX; Adrian joins forces with Heather Webb to create the live band Adrian and the Sickness.

Adrian for President by Adrian & the Sickness First album with Heather Webb and Mr. Furley.

Adrian and the Sickness - BFD -Adrian and Heather join focus with Kathy Valentine of the Go-Go’s to create this music.
OUT OF PRINT... BUY last remaining copies from distributor

Be Your Own Savior - Adrian & the Sickness - Heather’s last album with Adrian. Heather leaves the band.
"Blessed is she who headbangs to the beat of her own drum” - Nina Hernandez Austin Chronicle
OUT OF PRINT... BUY last remaining copies from distributor.

Adrian and Heather join forces again with Armando and release a parody video of Ozzy’s Bark At the Moon: